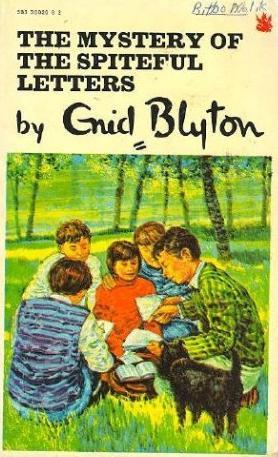 The Find-Outers: The Mystery of the Spiteful Letters : Book 4

The Five Find-Outers and Dog are together again! Bets notices that Gladys is upset about something. The “telegraph boy” nearly runs Mr Goon down! Bets tries to get Mrs Moon’s address from her mother by sending a small parcel. Mr Goon finally loses his temper with Mrs Moon.

The Mystery of the Spiteful Letters

The fourth mystery is a little disappointing in the end. It starts off well, with Fatty disguising himself as a red-headed telegragh boy who “accidentally” lets his bike fall on Mr Goon’s shins while he delivers a telegram to the others saying that Fatty has gone to solve a mystery in Tippylooloo somewhere in China.

The telegraph boy is very apologetic and polite, and Mr Goon actually likes him: Later in the book Fatty dons the same red wig and pretends he’s a butcher boy, and later still a parcel delivery boy. I enjoyed the whole red-headed boy thing, and Mr Te confusion as each disappears into thin air without a trace the last from a box mysyery where the befuddled policeman locks him up.

But all this fun doesn’t make a good mystery.

Someone is sending “nonnimus” spiteful letters to certain others in Peterswood. The adults confide in Mr Goon and everything is kept quiet so the kids can’t “interfere” The first big step is getting hold of the letters, which they do with the help of Gladys, the slightly feeble-minded housemaid, who naughtily nabs them from Mr Goon’s possession.

The Find-Outers note that the letters are post-marked From this the gang deduce that the letter-writer must get the There are no collections on Sunday so actually the writer could have posted the letters anytime after the last Saturday collection. Now, if there was an additional collection earlier on Monday mornings, say at 8am, then it would logically make sense that the letters had to be posted after 8am for collection at And just because the spiteful letters are written only to people in Peterswood, suggesting intimate knowledge of the villagers, doesn’t necessarily prove the culprit actually lives there, and has to take a bus every Monday morning.

Did people not have cars inwhen this was written? I’m sure some people did! Naturally it turns out Sptieful and the gang were right in their wild assumptions, but I think Blyton could have strengthened the reasoning a little.

The trip to Sheepsale was fun, although the bus ride was a little odd. There were five passengers on the bus and each Find-Outer chooses one to sit next to and question. If I were a passenger, I’d be mightily suspicious if five kids got on and split up, sitting next to other passengers instead of choosing empty seats. The characters are spiteufl usual Blyton-style bunch: I won’t give away who the culprit turns out to be, but like other mysteries it’s no great surprise. What’s great about previous mysteries like Burnt Cottage and Disappearing Cat is that, although we know who did the crimes, we don’t know how.

In Spiteful Letters I spitefu who the culprit was but was blytob by the resolution; there’s a really convenient bag of clues that Mr Goon finds under a bush by the river and, assuming they were planted there by Fatty, he dumps the bag in the Find-Outers’ laps. Fatty immediately knows who did it—as do the readers, because it’s pretty obvious by this point.

The Mystery of the Spiteful Letters by Enid Blyton

mystety In fact, it’s almost annoying that none of the other Find-Outers can figure it out. When Fatty does his presentation in front of Mr Goon and Inspector Jenks I was almost expecting some other revelation, something I wasn’t expecting Admittedly I’m more than twenty years older than the intended age group, but still it’s a little weak. And there’s no real motive either, other than the culprit being a spiteful person.

And why exactly does the culprit leave the bag of clues under a bush by the river? That makes no sense. I have mixed feelings about this book.

It has fun parts as Fatty rushes about all over the place in disguise, but the or itself seems a little feeble in my opinion. The Mystery of the Spiteful Letters is to me probably the third-weakest lettets in the series behind Banshee Towers at a firm number one, followed by Tally-Ho Cottagewhich I found quite boring.

I found the book a little less enthralling than the others and had no trouble at all putting it down during my first reading. Given that, the book still has some interesting points. The concept of anonymous letters has not been recycled from or copied in any other Blyton book as far as I am aware, which makes the mystery a little unique. However the discovery sliteful the final clue Goon thrusting the real clue on Fatty was also spitevul in The Mystery of the Strange Bundle.

I also found it just a little too convenient that Goon just happened to stumble upon the clue without any forethought. As was the Inspector’s sudden appearance at Pip’s house just as Fatty was about to reveal all to Pip’s mother.

This would have broken the Find-Outer series rule that they have to rub it in the face of Goon by always having Inspector Jenks present when the mystery is revealed. Fatty’s gallavanting about as various red-headed boys is the most endearing part of the story.

The Mystery of the Spiteful Letters – Wikipedia

His constant polite insolence always appeals to me, and I loved his “Please don’t report me, sir, I’m that sorry” after while disguised he almost knocked Goon over on purpose. He again used his newspaper trick to escape from the room he was locked in, which prompts me to mention Mr Goon’s “long routine telephone call which he made every day about this time”, allowing Fatty ample time to escape.

I thought that was more than a little thin and badly orchestrated. I did find it a little strange that there was no mention at all of Luke from Disappearing Cat when the children went to interview Miss Tremble.

They saw Miss Harmer, and I was expecting Luke at least to pop his head around the corner of the house and grin at the children. I think it would have been nice for such a wonderful character to make another appearance, if only for a paragraph. I thought Fatty showed amazing ingenuity when he thought of dressing up as a delivery boy in order to obtain handwriting samples, however the mystery was otherwise just a little too lucky.

From Bets overhearing conversations and Gladys slipping the letters to Fatty to Fatty answering Pip’s telephone, the sudden appearance of the clues and Inspector Jenks’ presence at Pip’s house—it is all just a little too contrived for my liking.